hunter | September 28, 2011 at 11:07 pm |
WHT,
Oil does not give a hoot about your math.
You are an historical illiterate and an imbecile hiding behind your self-declared genius.

The diffusion kernel resulting from solving the Fokker-Planck equation (sans drift term) is:

We place an impulse of concentrate at x=0 and want to watch the evolution of the concentration with time. We have an idea of a mean value for the diffusion coefficient, D, but don't know how much it varies. The remedy for that is to apply a maximum entropy estimate for the variance assuming a mean value D0.

So then we can apply this to the kernel function

This gives us a result that shows a singularity at t=0 for x=0. In practice, the value of x is not precise, so that we can also place an uncertainty around the value of x.

Once again we can apply this to the concentration, marginalizing x out of the picture:

This integral is very straightforward

which is precisely the form, apart from normalization, used in fitting to the IPCC curves!

See fat-tail-impulse-response-of-co2. This is the impulse response function I used:

So comparing the values, 0.15, is the square root reciprocal of a median diffusion time given by:

This comes out to 44 years. However, because of the ratio, we lost the ability to figure out either the average diffusion coefficient or the average displacement though. The fat-tail comes about because 44 years is only a median, and a mean diffusion time does not exist.

The chart below is not definitionally correct, as it describes the impulse response as a residence time and not an adjustment time, but you can see how the diffusional model fits on top of the climate science simulations. It falls off rather quickly but then assumes the slow hyperbolic square root growth which matches well over many orders of magnitude. The one key difference is that the diffusional model will asymptotically go to zero, but it will take a long time, as long a geological time as it took for the original fossil fuel to form in all likelihood.

From the textbook "Introduction to Organic Geochemistry", I applied this fit using a value of 0.19 instead of 0.15 for the scaling coefficient. Every chart of the CO2 impulse response I have encountered shows excellent agreement with this very characteristic fat-tailed decline. 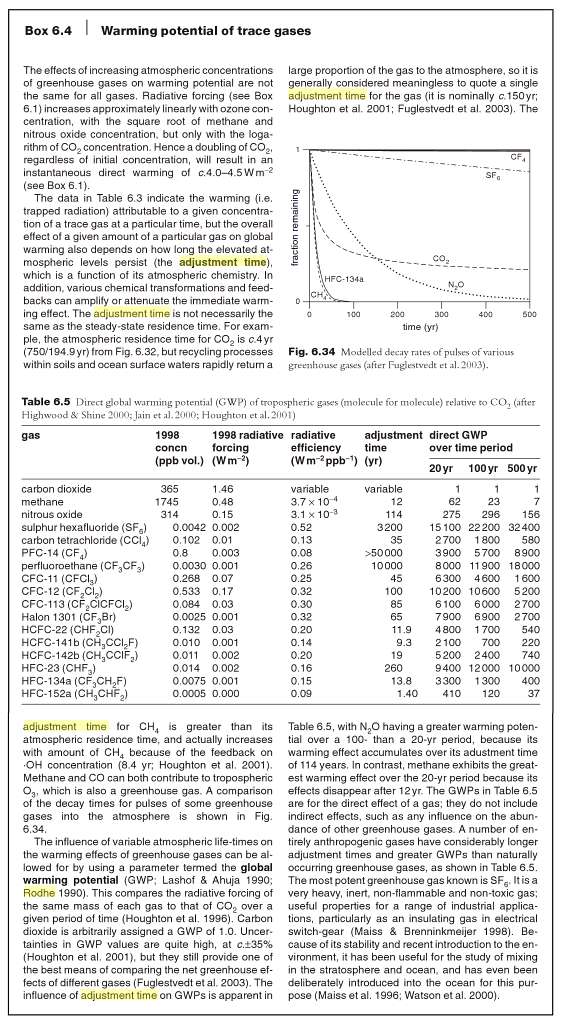 We can create a brilliant analogy of CO2 with coins in the transaction system.

Residence time is a coin getting freshly minted and finding out how long it circulates before it gets handed-off as change. When a different coin is exchanged, the person has lost track of its lineage but that does not matter as long as an equivalent coin takes its place. It doesn’t matter if the coin had identifying markers or not, as the excess coins are still circulating.

Adjustment time is a coin cycling through the system long enough that it gets decommissioned or gets lost or destroyed. It then permanently gets removed from the system.

The coin in the financial transaction system is equivalent to the CO2 molecule in the carbon cycle.

These kinds of studies have been done on circulation of money, look up the Where's George project. I was able to use this data to generate a model for travel patterns of people here. Perhaps not remarkably, this data shows the same fat-tail statistics that the CO2 does. This is all based on standard random-walk and dispersion arguments that come up time and time again.
Posted by @whut at 11:07 PM